My niece Eden loves to write. At the age of 12 her thoughts are unique & rather deep. Here goes one of her short stories.

Defense is the Best Form of Attack

The drum was beating. The horn was sound.

The king hadn’t visited in a long time, and did not inform anyone about his visit. Nothing was prepared.

So the bakers rushed to get him fresh pastries, and the tailors rushed to get new clothes to gift him. Yet when the king got out of his chariot he said: “I want no gifts or sweets or anything as such. All I want is a brave man to help me.”

Many boys and men stepped out. Too many for the king to choose. So he asked them to battle to see who the three strongest men were. The battle took place then and there. Finally the three men were chosen.

The king still did not reveal what he needed them for. But the men did not question the king; they simply did what they were told.

The king took them on his chariot and invited them to come with him to the palace. When they reached the palace the king explained to them that he had three tigers. Each of the men were to battle with one tiger and make it surrender to them.

The first man battled furiously with force, bravery and strength. The tiger had tried to defend itself but it was too late. The man hit and beat it until it was dead.

The second man, too fought bravely, but did not kill the tiger. He tossed it around and severely injured it. The man soon could not fight anymore. He began to feel sorry for the tiger. He walked away in shame.

The third man did not fight. He simply defended himself from the tiger’s actions. Soon the tiger began to calm down, as he knew the man meant no harm. It soon stopped attacking the man. The man came out without a scar or wound and so did the tiger.

Seeing both the man and the tiger without injury, the king was surprised. He decided that the tiger had surrendered to the man. He then declared the man, the strongest and most respected man in the kingdom and asked him to protect his daughter while he was away. He said all this not knowing that the man did not fight, but just defended himself.

A bread knife I was,

A bread knife I am.

I sat there on the shelf,

Of the Winchester’s store.

A man walked in,

He took me, and made me,

Cut all the bread.

Until one day I could cut,

He tried to sharpen me,

But I could not be sharpened.

He tried to shape me,

But I could not be shaped.

He hadn’t taken care of me,

He had to throw me away.

A bread knife I was,

A bread knife I no longer am. 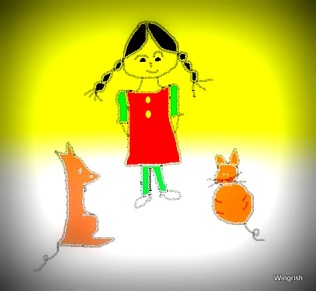 At one time I always believed that children & dogs were the best  judges of character.

Children by & large tend to instinctively trust or doubt another person.

They are also by & large spot on in their assessment of people.

Dogs can trust or will bark & kick up an alarm if they suspect a person.

They really seem to know who can be trusted, atleast in most cases. They also know who needs to be nipped in the foot…& fairly fast at that.

And now there’s a cat in the equation. 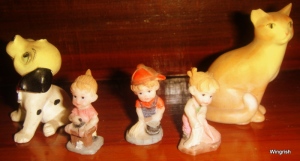 I have to humbly admit this.

I am learning that cats couldn’t  be bothered about humans, their lives &  petty affairs one way or the other. So forget about cats being a good or bad judge of character.

It’s own life is worthy of introspection & praise. No one else’s.

It’s in your interest to find out if YOU are worthy of a cats attention, affection or…if you qualify for its indifference or deepest contempt.

Bah to the human beans. They are all Humbug as Scrooge would have said. 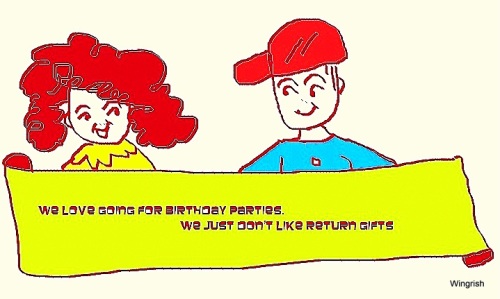 Growing up, I don’t recall receiving very many return gifts after attending birthday parties of friends or kids in the neighbourhood. Even if there was the remote possibility of it having been there, it would have been something rather simple I’m sure…like pencils & erasers at the most. Sigh! Neither did we give those kids who attended our birthday parties any return gifts. Poor souls.

I remember one’s birthday was ‘the day’ waited for with great excitement – it was all about new clothes, the cake, balloons, friends & family who would drop in for the party & of course the rapturous vision of an awesome pile up of gifts. Looking back, it was also a lot less complicated then.

Today, I watch & hear about parents who go nuts as they try to organise ultra magical birthday parties for their kids, each trying to outbeat the parents of  other kids. I wonder who’s suffering from peer pressure…appears not just kids but parents too! With theme parties & event managers called in to make sure that 1 year old Meena’s birthday is grand & a riot (Meena incidentally would rather just go to sleep) – the parents are at their wit’s end trying to figure out how to make it different & what  the appropriate aka great return gifts should be. I would not be off the mark in saying that the motivation for many children to attend birthday parties is simply the excitement of collecting their  return gift! Kids will endure the party if they have to, knowing there is light at the end of the tunnel, knowing that it is well worth the wait. [Parents – it had better be well worth the wait…]

The next time you plan a birthday party for your kids you may want to consider some of these options instead of the Barbie, Ben 10, doll house or cricket set circuit.  These are some of   my best picks for return gifts, they are eco-friendly  too! So go ahead & give this a shot –

1. An earthen diya on which they paint their names

2. A handmade paper bookmark with the message “I love reading. No space for more toys”

3. After the birthday party, hand brats back to their Parents with  “Here’s our return gift to you – your child” added in smoothly.

4. Or try giving kids a map of the locality so they return home safe.

5. A nice colourful poster for their room “This munchkin (or teenager) does not accept return gifts.”

Risk – kids who receive the above mentioned return gifts may return no more to your home forget your parties. In fact they may choose to ‘unfriend’ (another blasted new age word)  themselves with your kids! On second thoughts, maybe it’s not such a bad thing after all…